Information on how to make contributions to the tsfpga project.

For tsfpga development we have a lot more python dependencies than when simply using the package. Install further dependencies with:

You also need VUnit installed somewhere where python can find it.

Documentation is built using the tools/build_sphinx_docs.py script. The documentation pages have information about python unit test code coverage. So before building documentation you must run pytest with coverage reports enabled like in CI:

If want to skip handling of coverage for the documentation there is a flag available in the script, see build_sphinx_doc.py --help.

How to make a new release

Releases are made to the Python Packaging Index (PyPI) and can be installed with the python pip tool. To make a new release follow these steps.

Before doing anything, launch a CI run from master to see that everything works as expected. The CI environment is stable but due to things like, e.g., new pylint version it can unexpectedly break. When the pipeline has finished and is green you can move on to the next step.

We use the Semantic Versioning scheme for tsfpga. Read the Summary at the top of that page and decide the new version number accordingly.

Check the release notes file unreleased.rst. Fill in anything that is missing according to Maintaining changelog.

where X.Y.Z is your new version number. The script will bump the tsfpga version number and copy release notes to a new file. The changes will be commited and then tagged.

Pushing a tag will create a special CI run in gitlab:

The pipeline for the tag will run an additional job deploy_pypi: 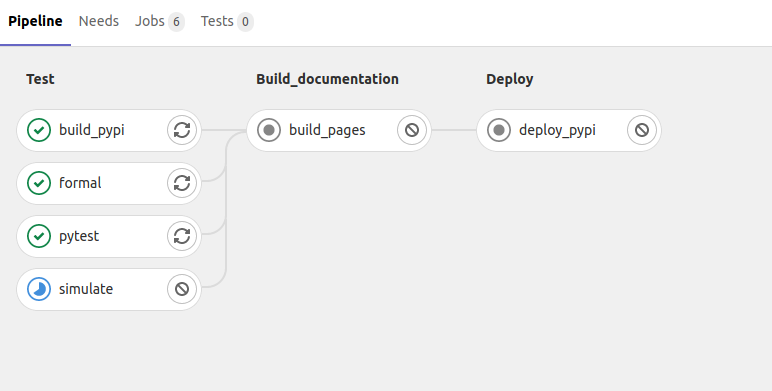 The package is uploaded to https://pypi.org/project/tsfpga/. If you really want to make sure that everything has worked you can check there and see that your new release is available.

If everything went well then you can merge your release commit to master.